10 years and lots of time to get apprehensive about it......

By the hammer of Thor, Clay Matthews is fucking awesome!

Clay Matthews may have seemingly been carved out by the Norse Gods of Valhalla.  He is a chiseled beast who was sent down to destroy all the mortals in his path.  He especially looks the part.  He could very well be the brother of Thor, the God of Thunder.  They both have long blonde flowing locks and wear helmets with shoulder pads.  However, the fundamental difference is that Clay Matthews doesn’t need some mythical hammer to get business done.  He just needs a blitz called. Hell, if Thor and Clay Matthews were dropped into a cage, my money would be on Clay.  He is a beast. 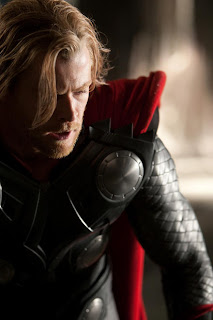 Now Clay Matthews isn’t any beast.  He is more like a genetically enhanced lion that has the tendencies of a piranha.  He smells blood and he hones in on the kill.  Ask Kevin Kolb about that.  Last week he personally auditioned for the sequel to Pirhanna 3D.   He might get the part, by the way, because he looked convincing taking an attack.   You could also ask Trent Edwards what it feels like to get pounced by a man eating piranha lion.   Think about it, folks.  Clay totally is some form of lion pouncing on prey in the Serengeti.  Just look at that mane of hair for starters.  And if he were a lion, his lion name would be Simba because of his lineage.   Clay senior would be Mufasa Matthews.  Trust me here, Clay is taking his place in the circle of ass kicking.
The Packers looked good today, right?   Nobody seems to notice because the news outlets are busy felaciating Mark Sanchez for the one good game he has seemingly ever played.  Let’s be honest here, people.  The Patriots just played a shitty game here.  The defense was lacking and Sanchez just happened to pull his head out of his ass for a few minutes to throw a few pretty passes.  Brady really did play shitty.  Threw at least two interceptions and fumbled from what I saw.  It must have been because his Justin Beiber hair got jostled into his eyes.   You’d throw like shit if you couldn’t see clear as well.
My point is that the Packers are playing well.  They won the tight game last week by any means necessary.  This week they manhandled a team that they were supposed to beat.  That is what a good team should be able to accomplish.  Now I understand that it is way too early to be purchasing playoff tickets.  There are 14 more weeks ahead for the Packers.  That is a long time for bad things to happen.  However, there is no reason we can’t be optimistic.  Losing Ryan Grant shouldn’t be a problem.  They have capable guys.   McCarthy just needs to learn to trust Brandon Jackson and everything will be alright.
I am calling it right now.  Packers versus Texans in the Super Bowl.   I want to see Jerry Jones watching the game from his private suite in the Arlington Transformers Dome or whatever it is called.  He will have had a lot of time to get over the Cowboys not being there since they will have been eliminated from the playoffs long before then (probably mid November with the way things are going).  I apologize for no official NFL predictions blog this year.  I was just sick of all the predictions and analysis after all my fantasy drafts.   None of you cared what I thought anyway.
Can AJ Hawk get traded already?  Seriously.  He hasn’t been useful in Green Bay since they stopped having him on the pre-movie commercials at Marcus Theaters.   All he was ever good for was telling people to shut up and turn off their phones.  What is impressive about that?  There are basement dwelling high school kids employed by Marcus that can do the same thing, and for less.  The Packers really should push this skill of his when trying to trade him.  I am certain that there are noisy people in Buffalo movie theaters.  There has to be since there is nothing to hoot and holler about at the football stadium.
Okay, I am done with this one.   I can’t write much more when I would rather stay up another hour admiring my Charles Woodson autographed football.
Posted by Nick Licious at 9:12 PM No comments:

I'd rather be creeped than scared.

It is my personal belief that there is a distinct difference between the terms “creepy” and “scary”.  In fact, you have to break the words down to their root to get what I am talking about.  To creep is for something to slowly move, often stealthy, and often building intensity.  To scare is to cause a sudden alarm or startled state.  In essence, a scare is a momentary feeling, whereas a creeping feeling builds and lurks for a while.  Many people interchange or use their words incorrectly when referring to the genre of horror in movies.  I hate that.  I really hate that.  Like with a passion.  People should think about what they are saying when they utter, “I’m going to see a scar movie’.
In fact, I don’t even think that there is such a thing as a scary movie.  There are scary moments within the movie that may startle the shit out of someone, but the movie as a whole is not scary.  There are better adjectives to describe it.   So, to simplify my argument, I must say that there are two main types (amongst others) of horror movies.  There are movies that are a collection of scares or there are creepy movies.  I prefer the creepy movies over the other options.  They resonate more and have a lasting effect.  In fact, they are often the smarter of the movies in that genre.  Creepy movies often are slow burning and build upon the insecurities and fear of the viewer.  Some of the real good ones even manages to incorporate a few scare moment as well.  In essence, they are a complete movie experience.  Rather than momentary fright, you may have an actual emotional response invoked by the story being told.  That, to me, is really freaking awesome when it happens.
Now don’t get me wrong, I am not bashing movies that are a collection of scares.  They have entertainment value as well.   However, they aren’t the movies I tell everyone at the office about on a Monday morning.  The creepy ones will usually get a stamp of approval by me with a glowing review to go with it.  I talk about them because they got in my head and got me thinking.  Anyone who knows me knows that I like a good creepin’.
I’ve seen a lot of horror movies in my time.  Many of them are outright horrible.  Others are decent movies, but very forgettable.  The best of the bunch end up leaving me creeped out by what I saw.   The best of the bunch leaves me with a handful of films that I consider the most fear inducing of all time.  Among them I include The Exorcist, Halloween, The Blair Witch Project, The Strangers, Paranormal Activity, Let The Right One In, and The Others.  Each of those movies left me feeling afraid of something for a while and a few of them even gave me some nightmares.  You totally know a movie is creepy when your subconscious is bringing shit up while you are sleeping.
This weekend I added another movie to that list when I saw The Last Exorcism.  To say that the movie was creepy would be one way of putting it.  To say that it rattled my skin and my mind would be a better way of putting it.  It works on several different levels.  On one level it gives you the scares that so many of you are looking for.   On another level it slow burns suspense and fear causing your heart rate to increase as the movie goes on.  It will also have your mind going in several different directions.  In a nutshell, your body will have a physiological and a psychological reaction to this movie.  Perhaps I am biased and have a thing for exorcism movies since I already admitted to liking one such movie and did also enjoy Dominion: Prequel to The Exorcist, and The Exorcism of Emily Rose.  Then again, that doesn’t make me so much biased, but more as vulnerable to a particular fear stimuli.  I apparently believe in demons.  Who would have guessed?
I am sure you have seen the commercial for The Last Exorcism.  You already know that it is about some girl who is possessed by a demon.  That really is all the previews tell you of the plot while showing you a few moments that intend to frighten you.  The previews do the movie a total disservice and don’t sell you on the rich character development and smart plot.  There is a lot more to it than some girl being possessed.  In fact, you are probably thinking “of course there is.  It is about some priest’s last day on the job”.   That is generally the idea, but a very vague and expedited plot description.  Let me enlighten you without spoiling what makes the movie better than the average horror flick.