The most stressful thing ever....

Pull up your pants, zombies are coming... and not in that way. That's gross you even thought of it like that!

The Walking Dead is actually very much alive in my eyes....

I’ve had a lot of things I have wanted to gush about on this blog.   In true form, these things don’t have much to do with my own personal adventures and experiences.  Those haven’t been worth noting unless you find working 12 hour days to be sexy.   You, don’t , do you?  Because if you do, maybe we can meet up later.  Catch some dinner at Taco Burrito Mexico and maybe a budget movie after that?   Hell, we could even be real romantic and bump uglies behind a dumpster.  So, yeah, if that kind of thing tweaks your hormones, well, tweet me or some shit like that.
Anywho, I want to touch base on something that impressed the utter shit out of me this weekend.   Not often does a premiere of a television show give me a geek boner.  I can only recall LOST and maybe Dollhouse doing that for me.  This past Sunday I was blown away by the premiere of The Walking Dead.

How come it has taken this long for a zombie themed show to come to television?  Seriously?  It is a definitely workable idea.  They have made shows out of less, haven’t they?   Like Cavemen for example.   If a Geico commercial can become a show, then zombies should have been a television show years ago.  Perhaps the difficulty in developing such a show revolves around the fact that it couldn’t be done without being too graphic.  In recent years, basic cable has developed into a medium where networks can be more bold and risqué.  Networks like FX and Comedy Central have been dropping a few more swear words for years now.  Then AMC came along and decided that they could one up everyone with edgy and brilliant television.  Mad Men blows my mind with every new episode and their willingness to go just about anywhere with the story.  I should not have been surprised by what AMC did with The Walking Dead.
I advise you to get your ass on Hulu right now to start watching it.  There is no point in avoiding it.  You’ll be hearing about it for awhile.  You will be impressed by how the standard run of the mill zombie apocalypse could be so interesting.  I could go into details about the characters and plot, but that would just take away from the fun that will come from utter surprise.  I probably should hit on what I loved about the show though.
First of all, the show is brilliantly shot.  The cinematography is unparalleled for a television show.  The only ones I can recall being comparable are Mad Men and Lost.  It looks as good as any movie you will see this year.  It was shot with precision and love.  The camera work makes every scene that much better.
The opening scene is just crazy awesome.  It is unlike any opening scene to a television show ever.  Hell, I don’t think any show has ever started off being that graphic.  It is creepy beyond belief and will suck you right in as it intended.  It would ruin it to tell you anymore.   Watch the first few minutes.  You’ll then keep watching.
They don’t waste any time explaining the zombie mythology in The Walking Dead.  They know that we’ve all seen and heard the same shit over the years about zombies.  Most of it applies here and gets referenced in a way that isn’t preaching it to us as if we aren’t ignorant.  The audience is treated with respect and dignity.  The writers assumed we all were able to think critically.  This is apparently when we realize that the characters are not goofy caricatures and are in fact more complex than the solution to a zombie apocalypse.
Speaking of that, there doesn’t seem to be a lot of worry about curing the zombies or any of that typical save the world nonsense.  The people in this story are fighting for their lives every single day.  They don’t have time to worry about some scientific crap.  I imagine that the show portrays how it would be if shit were ever to go down in real life.  We wouldn’t have brainy nerds everywhere that could solve the problem by mixing some serums.  I love that the fate of the world has generally been accepted in The Walking Dead.  Now it’s a matter of survival.  That is good television right there.
Finally, there was one scene nearly the last third of the episode that will tug at your heart a bit.   I never envisioned that a scene in a zombie show could be so poetic and meaningful.  This is when it struck me that this is a zombie franchise that is actually going to try.  That’s the problem with the horror genre.  Nobody really tries these days.  It is all about the quick buck.   The Walking Dead actually cares about the story it tells.  It is apparent to me that the zombie story is just the backdrop for real human drama.  To me, that is just plain awesome. 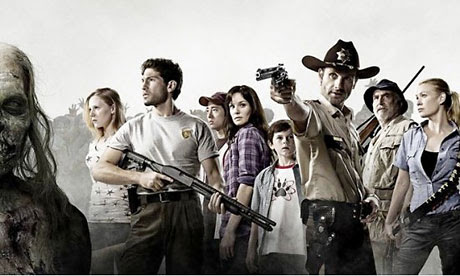 There you have it.  My relentless endorsement of The Walking Dead.  I will be watching it every week until it finishes next month.  I am happy to say that it didn’t take long for something to fill the void left by Lost.
Posted by Nick Licious at 10:15 PM No comments:

If you didn’t see Paranormal Activity yet, you probably should be reading another blog right now.  If you didn’t like Paranormal Activity, well, then you also probably shouldn’t be reading this blog.  I write this for people who enjoy creative movies with legitimate scares that make you think twice about that sound coming from the other room.  Okay, I think we cleared out all of the riff raff.  Ten points goes to the reader who predicted that I would use the term “riff raff”.  Twenty additional points to those who guessed that I wasn’t wearing pants when I wrote those.
Relax, you perverts.  I am wearing shorts.  Get your minds out of the gutter.  I need you to focus for a minute.  Take a deep breath.  Compose yourself.  Don’t get rattled.
You’ll probably need to compose yourself a few times during the viewing of Paranormal Activity 2.  There are some scenes that will literally surprise you.  What worked in the first movie works in the sequel, but is amped up a bit.  I use the term sequel loosely since the movie does take place a couple months before the first film.  It also features the sister of Katie from the first film and her family.  Needless to say, the entity from the first film starts its reign of terror on this unsuspecting family before it moves on the amply chested Katie (Katie Featherston) and her live-in instigating boyfriend, Micah (Micah Sloat).  The overall plot here isn’t worth ruining in a simple review.  Just trust me that some scary shit escalates for the family in question.  The cool part is how it all ties into the first.  That big reveal will make you go back and watch the first movie.
What works with Paranormal Activity 2?   Most importantly, they make the family in question seem like your everyday cookie cutter people.  There is nothing too spectacular about them.  Nothing to love about them.  Nothing to hate about them.  You don’t wish harm upon them like you would have with Micah in the first film.  These people could be your family or the people living next door.  This added with the simplicity of the effects makes the movie hit home a little harder when the scary shit goes down.
All of the scares in Paranormal Activity 2 are what I would call legit scares.   There are no bits where a cat jumps out at a tense moment.   Instead, strange shit happens in the intense moments.  Nothing comes cheap.  That is a relief for a horror movie.  In addition to the scares is the mere fact that there is a thick aura of suspense.  You are waiting the whole time to see what the paranormal entity is capable of and as to what its endgame is.  At any moment it could erupt into chaos.  That is the coolest thing about the Paranormal Activity franchise.  The creepy feeling the movies give you is well earned.
I became especially fond of what I call the use of “redundancy shots”.  These are scenes in the movie often used to get us familiar with the setting and/or the characters living in the house.  You might assume they are a glimpse into the everyday life of the film’s family.   Technically, that is what they do.  However, they also set up the scares for later.  You become almost too familiar and comfortable with the surroundings, just as the family does.  Then…. BAM!  You just pissed yourself.
Who doesn’t like being legitimately scared by a movie?  I highly recommend that you see Paranormal Activity 2 in an attempt to get the blood flowing.  It’ll work just as effectively as internet porn, only you won’ t need to clean up.
Posted by Nick Licious at 9:22 PM No comments: