My review of "Brave"

Pixar makes movies with great stories, great characters, and great moments.  They tend to do that better than any of the major movie studios and seem to collect Oscars every year.  The best part about all this is that their movies are animated.

There is a paradigm that suggests that animated movies are nothing more than cartoons for children.   Anyone who has seen a Pixar movie knows that is the farthest thing from the truth.  Pixar uses a niche form of media to tell stories in effective ways.  Their latest effort, “Brave”, follows an established tradition of quality storytelling and character building.  I enjoyed it immensely and am about to tell you why.

First, here is the cast:

The story of “Brave” centers around a Scottish princess named Merida.  She is a spitfire to say the least and has a craving for adventure.  She is not the typical young lady of royalty.  This is established early on with a flashback that shows how she got the bow she now wields like a professional.  The flashback also provides us with the glimpse of the movie’s villain, a ferocious bear named Mor’Du.   Merida’s father, King Fergus goes to battle with this bear, which results in the loss of his leg, which is replaced by a wooden peg.  Mor’Du manages to escape death on that fateful day, only to be seen at a later date.

The story picks up steam when Elinor invites the lords of three neighboring clans to present their first born son in a competition of sorts for Merida’s hand on marriage.  It represents an age old tradition of arranged marriages.  This process is to be respected in the kingdom which our characters live.  Elinor, being the queen and Merida’s mother, believes whole heartedly in this process.   Merida, being an independent and adventurous young lady, doesn’t agree with these plans for her future.  This is the central conflict of the film.

Merida and her mother don’t see eye to eye on much of anything.  It is your classic teenage daughter argues with her mother, but in a more genuine manner than most movies use the concept.  Merida wants to choose her own husband or whether or not she even wants one in the first place.  In a nutshell, she wants to take control of her future.   Eventually she goes off to find a way around her predetermined fate.   That leads her to a witch in the forest that assists with the casting of a spell that will change everything for Merida.  Specifically, Merida asked for the spell to change her mother.  This being a movie, you know it doesn’t go as planned.

I’ll spare you the details as to what goes wrong.  To say more would spoil a bit of the movie’s plot.  What I can say is that the movie forces Merida and Elinor to confront their mother-daughter problems.  That is where the heart of the story is.  A lot of classic questions about the mother/daughter  dynamic come to the forefront in a thoughtful manner.    “Brave” handles these ideas how you would expect them to be handled by Pixar.  They do so realistically and by keeping all the characters likable in the process.

There are two things that make “Brave” stand out as one of Pixar’s best works.  The first is the musical score/soundtrack.  Right out of the gate the music sets the tone of the film as adventurous.   There is a bit of Scottish flare in the score and the songs, which also enhances the experience.    Every bit of music helps push the story forward and even builds the characters, which is everything you’d want from the music.

My favorite aspect of “Brave” is simply how great it looks.  It is likely the best work Pixar has done in the animation department.  It works wonders with the 3D concept.  Only “Wall-E” compares in scope and detail.   Every time a wide shot of a landscape is shown, you can’t help but be impressed.  Most impressive are the smaller details, especially how they animated the simplest of things, like Merida’s hair.

Ultimately, “Brave” is another hit for Pixar.  It will enjoyable for both the kids and adults.  However, I suspect that the grown-ups will enjoy it a little bit more as they reflect upon all their parental conflicts as they were growing up.  Hell, they may be going through it on the other end of the situation as well and might find some comfort in knowing there is light at the end of the tunnel.

Seeking a Friend for the End of the World (My Review)

The end of the world is a very bleak and grim idea.  Yet, it seems to fascinate the hell out of us.  That is probably because everyone secretly wants to know what happens after “all this”.   The quickest way for everyone to experience that next step together would be for the world to end.  Nobody wants to go into the afterlife alone, do they?  If the Mayans knew what the hell they were talking about, we could find out this December. 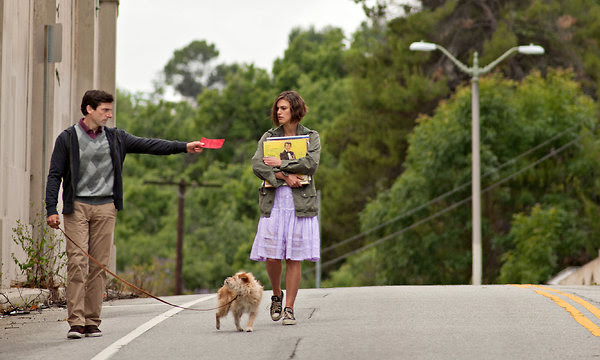 Were the Mayans onto something?  Probably not.   Well, maybe not.  Most likely not.  I suppose it isn’t impossible.  Regardless, they got people to talk about them for centuries.  They have inspired all forms of media into exploring the end of the world.  The most recent example of this is a little movie known as “Seeking a Friend to the End of the World”.  This is a movie that doesn’t get into the aftermath of an apocalyptic event, but more or less explores what such an event does to the world when we know it is coming.

The movie centers around Dodge (Steve Carrell), a seemingly unhappy middle-aged insurance salesman.  The story begins as an important announcement is transmitted over the airwaves via the radio and news broadcasts.   The hail Mary effort to fly a rocket into space to destroy an Armageddon sized asteroid named Matilda have failed.  There are roughly 4 weeks until impact and inevitable doom.   This news does not sit well with Dodge’s wife (Nancy Carrell), who gets out of the car and runs into the forest, never to be seen again.  Yes, the movie is bold enough to start this way.

As the movie goes on, we meet Penny (Keira Knightley), who lives in the same apartment building as Dodge.  She breaks up with her boyfriend and ends up having to sleep on the fire escape.  This is where she meets Dodge.  They build a rapport which leads to them making a deal involving their doomsday plans.  Dodge wants to go find a long lost love.  Penny wants to fly home to England to see her family before everything goes black.  Commercial flights have stopped at this point and Dodge says that he knows a guy who can fly her there.  Penny happens to have some wheels to get Dodge to his true love.   It is at this point the movie evolves into a dramedy of a road trip movie that follows the characters into the final days before that asteroid collides.

The previews make the movie to be a fun loving comedy.  That is basically not the case here.  “Seeking a Friend for the End of the World” is a drama that takes a humorous look at a gloomy topic.  The funny portions of the movie will make you laugh, but they are paced out throughout the film.  What the previews could never convey is just how much heart is in the story.  By the time the credits roll, you will be emotionally invested in Dodge and Penny.  I won’t give you any hint to the emotions to will experience as it will ruin the movie for you.  Part of the experience and feeling honest emotions is not knowing where this one goes.  Trust me on that.

The story excels when it is showing the truth.  You might ask how a fictional tale about the end of the world shows the truth.  Well, it shows a lot of honest and genuine behavior that will likely be exhibited when the end is eminent.  People will do some really irrational things.  Some people will let go of their inhibitions.  Some will try to knock things off that bucket list.  Others will want to take advantage of the situation for personal gain.   These situations are shown during the course of the film and lead to the funniest moments.

Steve Carrell gives what may be his finest performance to date.   You knew he was destined for greatness all the way back when he did “The 40 Year Old Virgin”.  Then he did “Little Miss Sunshine” and you saw more of his acting chops.  Then he did “Crazy Stupid Love” which was a performance that got him closer to being an Oscar caliber performer.  I wouldn’t be surprised if something comes of this role next February when the Oscar nominations are announced.   Carrell’s muted and deadpan delivery is what makes his character work.

Kiera Knightley is solid.  I can’t make any complaints of her performance.  She expected to deliver in a dramatic role, however.  Therefore, by relation, her performance isn’t as exception as her counterpart’s.  The real fun performances are the short appearances by the likes of Patton Oswalt, Rob Corddry, Connie Britton, Adam Brody, Derek Luke, and William Peterson.   All of these people played characters that might seem to over the top in another movie.  Here they just make it work.  I can’t describe it any other way.

Should you go run and buy a ticket to “Seeking a Friend for the End of the World”?   No.   See it when you can.  It is one of my favorite movies of the year, so I highly recommend it if you do have the chance.  If that is when it hits DVD, then so bee it.  (I rate it 4/4 on the Stars system)
Posted by Nick Licious at 9:50 PM No comments: